Posted on September 1, 2012 by dianeledet

I read 130 pages of The Devil in the White City by Erik Larson and stopped, deciding the story 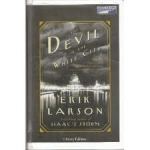 was way too gruesome for my taste.  The story recounts  events which occurred in Chicago during the World’s Columbian Exposition in 1893.  I was interested in the history, planning, and construction of the fair, but frightened by the story about the serial killer who lived during the same time.  I learned a few interesting facts about my hometown, why the “Loop” is called the Loop, and where the “Windy City” moniker originated.

In my opinion, this book is not for the faint of heart. The descriptions connected to the murderer and his victims are vivid and sickening for someone like me whose imagination works overtime.  If you like that sort of thing, you’ll like this book.  As for me, I’ll learn more about the World’s Fair and the many famous people connected with its creation from another author.

Interesting side note:  While reading this book, I had a déjà vu moment while reading about Burnham.  Burnham was close friends with the artist Francis Millet and their friendship was mentioned in this novel.  As I read the story, I kept thinking to myself, “I know this story”.  Not long ago, I read and reviewed Margaret Truman’s book about the White House.  One of the stories in Truman’s book was about Archibald Butt who worked for President Taft.  Butt was traveling with Millet aboard the Titanic when the ship went down.  Sometimes, it’s a small world when reading historical fiction.

2 Responses to The Windy City