Written in 1945, Peabody’s Mermaid by Guy and Constance Jones is a delightful story 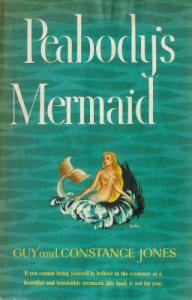 about a man who catches a mermaid.  The book was made into a movie which starred William Powell in the title role.  I saw the movie many years ago and it has remained one of my favorites.  The book is just as good and even a bit better.  I thought it was delightful.

The story centers on Peabody who is about to turn 50.  He and his wife are vacationing on St. Hilda island where Mr. Peabody plans to recuperate from a serious flu.  During his stay, Peabody takes a small boat out and catches more than he bargained for – an enticing mermaid.   He takes the mermaid home to their rented villa and places her in the large outdoor pond.  At first he keeps his secret, but as odd things begin to happen, he is forced to reveal his unbelievable discovery, but no one believes it and the peaceful vacation he had planned is turned up side down.   This is a lovely book and the ending is touching.